I’m happy to report that the yuri survey I ran was a massive success. Thank you very much to the many people who helped spread it, allowing it to reach far more people than I ever respected. Thanks to its spread, I was able to get 695 responses, far more than I needed in order to get meaningful data from it. I’ll go through all the questions I asked here, analyzing the data as I feel necessary and delivering the important results. It’s important to note that this data can’t be generalized to English-speaking yuri fandom as a whole; the survey is not scientific as I have no ability to randomly sample the population as a whole, but it should be useful in providing a rough idea. (Quick note: I use the phrase non-heterosexual women and such throughout the piece. In my own writing I would use queer instead, but I’m aware that not everyone is fine with the term or believe it applies to them so I’ve simply used non-heterosexual as an accurate, all-encompassing term). The raw organized data can be found here: https://docs.google.com/spreadsheets/d/1dZoMqgaDQqLjErnB-0GTEMjU-PikSgMFgI1EE-Oqqco/edit?usp=sharing.

The results for gender were roughly as I expected. Out of the 695 respondents, 328 were women, 308 were men, and 59 were non-binary or listed other for another reason. Because of the large non-binary contingent, no gender made up a majority of respondents, though women made up a plurality at 47.19%.

This data should do a decent enough job at disproving the idea that yuri is just read by straight men. As I said, this data is obviously not perfectly representative, but it’s quite unlikely given these figures that the fandom is anything like 80% male as a whole.

For all genders, the mode age group is 21-25, with 16-20 and 26-30 also being common age ranges. This isn’t unexpected, as these are just the general age groups for anime and manga fandom as a whole.

For the question ‘what country do you live in’, the US is by far the most common response, followed by Canada and then the UK. After these three English-speaking countries we have France, Germany, Thailand, Sweden, and Finland, all around the same number of respondents. After these are an assorted collection of people from across South America, Asia, Europe, and the Middle East.

The data on this isn’t too shocking. Manga makes up the bulk of yuri stories, so it shouldn’t come as a surprise that it’s the most popular. Anime’s prominence is also expected, as a general preference for the medium often carries over into yuri despite the relative lack of it. Far more interesting was what people selected when they put other. Most of them listed fanfiction or other prose fiction, alongside video games and a few other odd ones.

As expected, an overwhelming majority of participants read both original works and fanworks(doujinshi or fanfiction). There’s also a relatively large minority that only reads original works. It appears that very few people only read fanworks. It’s likely that this is influenced by how people read manga; if you only read licensed works and you live outside of Japan, then you won’t have a ton of opportunities to read fanworks.

An overwhelming majority(over 80%) of respondents enjoy shipping, though a slim majority overall doesn’t see it as a key aspect of their enjoyment of yuri. Outright disliking shipping is quite uncommon, but a fair amount of people don’t care much about it either way. A number of respondents answered that shipping, while very important right now, is something they would be less likely to participate in if there were more explicitly queer couples in anime and manga.

Way of Reading, Pornography, and BL 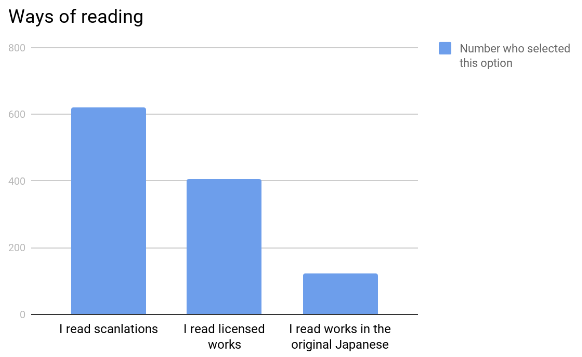 The results for this are mostly expected. Scanlations are very widely read, sitting at around 85% response rate. Licensed works are also popular, though for obvious reasons this is truer in English-speaking countries than in other countries. People who read the manga in Japanese make up a surprisingly large amount of the responses; roughly 20% of the responses marked this option, which is far higher than I expected but I suppose not surprising given how much goes untranslated. 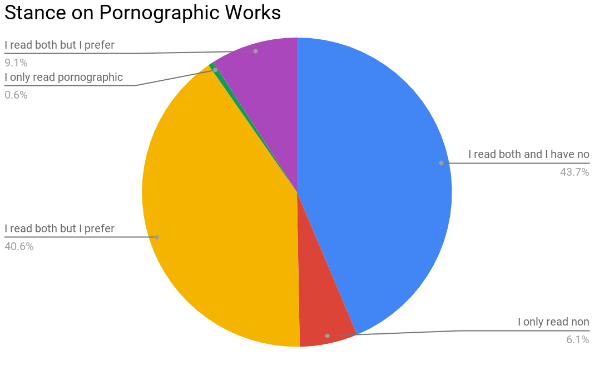 This is a collection of the top 10 favorite yuri works subdivided by gender and sexuality. There were too few straight women to include in the list, and given that there was only one straight non-binary person, they were excluded as well.

These results were very interesting. You can look at them for yourself, but a few things stood out to me in particular. Utena is very popular among women and non-binary people and doesn’t even rank with men. I suspect this is due to its heavy focus on gender, something that tends to be less interesting to men. Also interesting is just how popular Girl Friends is with straight men. It’s popular with all groups of course, but for straight men, it towers over the others. This is a bit of a trend; non-straight women’s favorites are more diverse, while straight men are more top heavy before dropping down to lesser liked works.

Experience with Yuri and Anime/Manga in General

For all genders and sexualities, 11-15 years was the mode period for first watching or reading anime or manga, which can be expected given the age groups in general. For watching or reading yuri in particular, the mode period was 6-10 years ago. This can also be expected, as if most people are first exposed to anime in their childhood, it’s unlikely for them to come across yuri until they’re older.

In general, the statistics on how people first came across yuri are as expected. A majority for every gender and sexuality said that they stumbled upon it online. More interesting is the ‘I sought it out’ option. For this, non-heterosexual women marked this at nearly double the rate of heterosexual men, and non-binary people marked it at a relatively high rate it as well. This isn’t outside my expectations; it makes sense that queer people would be the ones to actively seek out works like yuri. 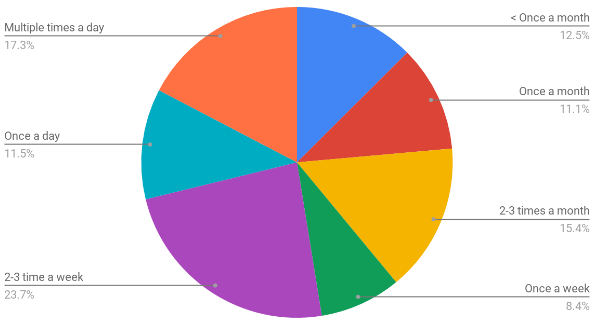 This tracks the rate at which people watch/read yuri works. Not much to comment on here, other than the fact that my somewhat vague wording may have confused things a little, resulting in the relatively low response rate for ‘Once a day’. Given that a majority consume yuri at least once a week, I think it’s safe to say that respondents to the survey are, in general, pretty big yuri fans. 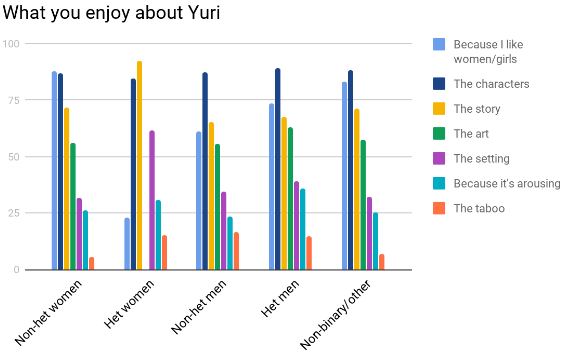 Our final question is one of the more interesting ones, though the data is roughly as I expected. ‘Because I like women/girls’ is most popular among non-heterosexual women and non-binary people; while straight men do like women/girls, they have plenty of other media that portrays men being attracted to those women. Also interesting ‘the taboo’ which I threw in there just to see if straight men were the most likely to pick it. Funnily enough, heterosexual women and non-heterosexual men were more likely to pick this as an option. That being said, heterosexual women made up very little of the respondents so I can’t say for sure if the data is reliable here in regards to them. Overall, most responses had similar response rates across all the major groups.

Once again, I’d like to thank everyone for participating in this survey. The data from it, while not scientific, is useful in the quest to disprove the straightness and maleness of yuri fandom, as well as to look at different preferences across lines such as gender within the fandom. I’ve also personally learned a lot while conducting it, and I’ll take much of that knowledge into account in my future work. Thank you very much for participating in this survey and/or reading this post.

10 thoughts on “Report on the Yuri Fandom Demographic Survey”