Ascendance of a Bookworm’s Myne really, really doesn’t like living in a ‘class society’, and this is something which, to put it lightly, has caught on with a significant number of leftist and left-leaning anime fans. In the show, after all, the hardships imposed on the lower classes by feudal society are constantly critiqued, and it’s difficult not to compare them to the forms that class oppression takes in our capitalist society. Yet, this is where the primary contradiction of the show emerges: when it compares its world to ours using Myne’s nature as an isekai protagonist, it almost exclusively notes the ways in which feudal society is dominated by class, implicitly claiming that our society isn’t. In one sense, then, Bookworm is a defense of capitalism, a trend which is quite common in isekai. At the same time, however, Bookworm isn’t made for a feudal audience but a capitalist one, and thus any critique of class society will necessarily serve as a critique of class under capitalism as well. Neither an analysis which views it as strictly anti-capitalist nor one which sees it as deeply pro-capitalism will provide an adequate picture of the series.

Myne clearly interprets the world she’s reborn into as far worse than the modern Japan she comes from, especially in the series’ early events during which she ignores everything aside from books. Within the narrative, of course, this is primarily because modern Japan has plentiful libraries and millions of books for those who love reading, while a commoner in the late Middle Ages is far from guaranteed to even be literate (ironically, if she’d been reborn in an East Asian nation she’d have had more luck). Yet, this presence of books in the modern world, even for those who are far from rich, marks a better world in itself.

Myne’s complaints about the world she’s born into are often against the explicit fact that what they live in is a class society, though perhaps caste would be a more useful term. If you’re born into a noble family, you’ll be a nobleman for life, and there are enshrined legal differences between the various classes which limit what they’re able to do. This stands in marked contrast to our society, where all people are theoretically equal under the law, at least on the basis of their class position. It would be silly to deny that many lack access to books, and that some are illiterate even today, but modern society objectively allows for more reading than feudal society. On its own, this is a fairly neutral point, and while literacy is quite obviously preferable, it’s not the sole fulcrum around which quality of life revolves. However, because Myne, as the protagonist, values books so highly, the lack of them paints our class society as strictly better than theirs. 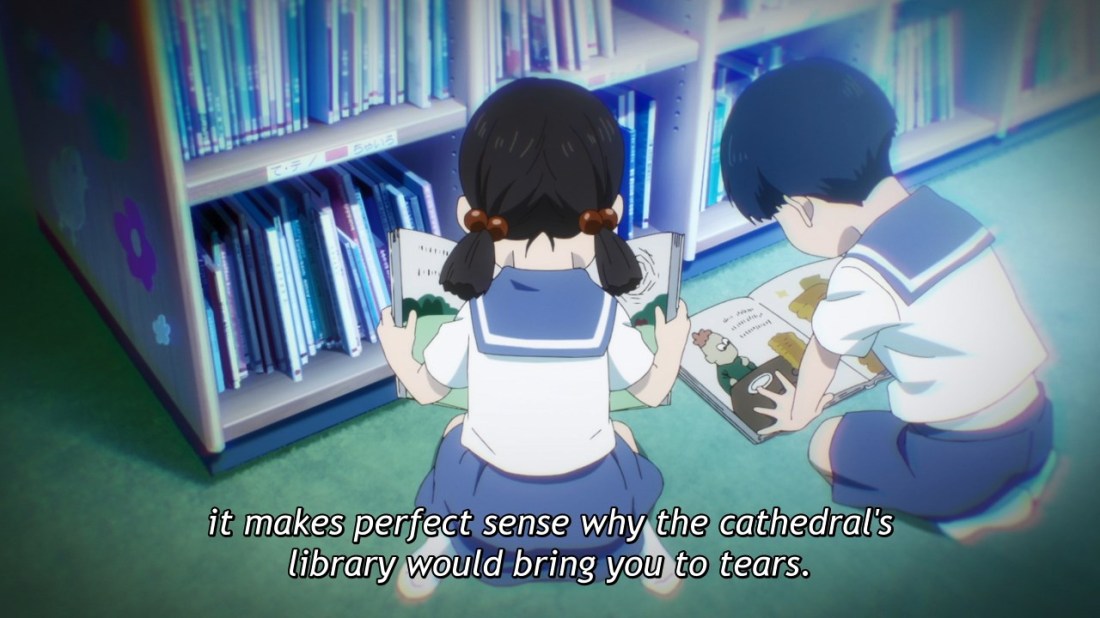 This is reinforced by Myne’s own behavior. While it’s easy to see the ways in which she rails against class society as anti-capitalist in nature, in actual fact it’s anything but. Rather, by running a business and working towards a Gutenburg-style printing press, Myne is actually aiding the birth of industrial capitalism. When confronted with the dying orphans in season 2, the solution Myne lands upon as a win-win is employing them for a pittance to work for her. Objectively speaking, this is an improvement to their lives — which was hardly always the case for newfound proletarians in actually existing early capitalism — and yet it still furthers the accumulation of capital and long-term decline of feudal organization. As all of the educated adult characters recognize, Myne’s inventions promise to revolutionize all of society, but I can promise that it’s not a proletarian revolution she’s about to usher in.

Nevertheless, it would be wrong to write the series off as capitalist propaganda. In the first place, this is a boring way to discuss almost any media, and while it may have value as polemic in certain cases (I see the utility in calling media about cops ‘copaganda’, even if ignores the artistic merit they might otherwise have), it seems useless to do so here. Second, however, the show is not entirely pro-capitalism. Myne herself is at the very least unconcerned with capitalism’s own flaws, of course, and as the main character she implies a political tendency towards bourgeois society which can’t be ignored. However, as viewers watching in from the capitalist world, her constant attacks against class society and its effects can’t help but target our actual world as well. After all, as I said in the introduction, this is a show aimed at those who live in capitalism, not feudalism, and its messages can only be interpreted in that context. That we find this relatable in the first place is evidence of this fact.

The specific ways in which Myne, personally, is hurt by feudal society draws intentional parallels to barriers that are still standing in the present day. Myne’s illness, while caused by magic, is something she’s unable to solve as a result of her class position, and this is hardly uncommon in our world; before someone says that this is an American concern, while Japan has universal healthcare, I can promise you that this isn’t the only anime which highlights that any class society will be worse for the health of those without power. The constraints that Lutz faces are similarly resonant into the present, especially where pressure to follow his parents’ wishes are concerned. I don’t even need to mention the fact that plenty of children are just as mistreated as the children in the orphanage, and are hidden from public view just as well. 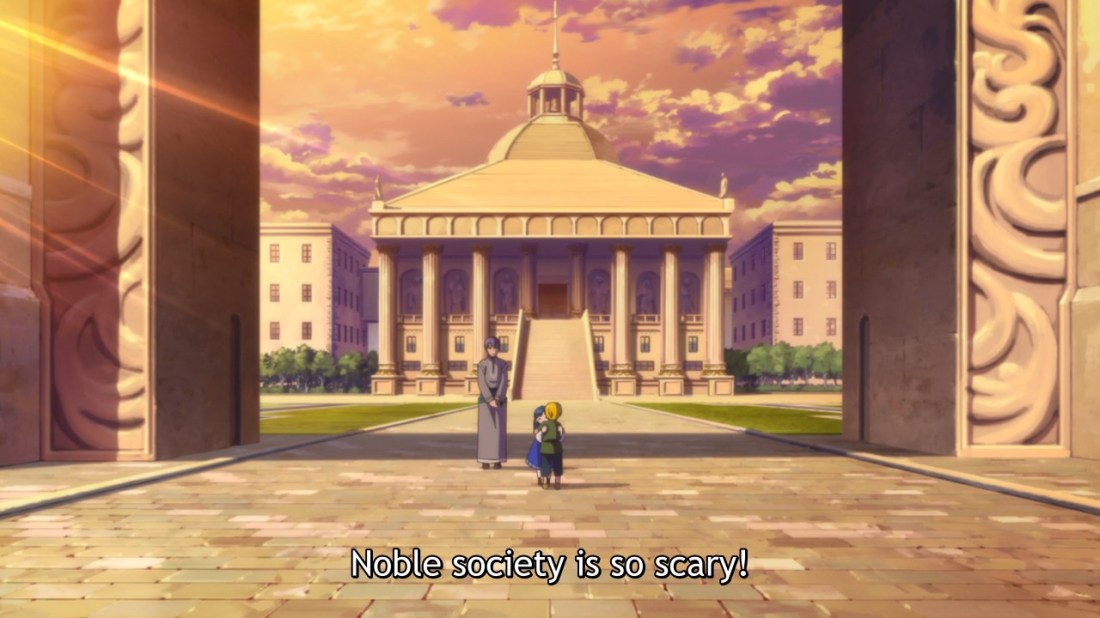 Every work of art occupies a given historical context, even ones set in the past or some variation thereof, and as a result is bound to speak to immediate concerns of the potential audience. It’s from this that the ideological contradiction of Bookworm emerges. Unlike in many other works, this isn’t a contradiction that the text even attempts to resolve. Instead, it’s simply presented to you: feudalism was so much worse than our current life, which offers relative material abundance (at least to those in the core regions). At the same time, many of the issues encountered in the series remain issues today, ones plenty of real people grapple with, and the reason why Myne isn’t aware of this is purely because she lived life on Earth as an unobservant, self-centered person who paid little attention to her own mother’s feelings. It’s no surprise that feudal society is a bigger gap in lifestyle for her than it would be for our Earth’s poorest people.

Isekai as a whole trends towards this contradictory valorization of capitalism while also criticizing it, and if anything Bookworm is less critical of the world we live in than many worse series. In a great number of these series, the hero, in traveling to a feudal past, is able to symbolically recreate a new bourgeois order, fulfilling the need to shake up a clearly bankrupt society while remaining within capitalism, because that’s the only society which is thinkable. In these works, the protagonist serves as a sort of messiah whose heroic actions redeem the bourgeois society which treated them poorly. Bookworm, however fails to explicitly present a society in need of remolding. Myne was not mistreated by our society in the slightest, and as a result has no cause to redeem it. It’s up to the viewer, then, to realize that access to books is still not universal, and won’t be as long as we remain in this mode of production.

In the meantime, however, we can hope to God that more anime comes to show us Myne’s journey towards founding our current order.

2 thoughts on “Can Books Topple Class Society?: Measuring Capital’s Role in Ascendance of a Bookworm”