I’ve made some pretty self-indulgent posts on here in the past, but this has to be the peak. In this three-part series, I’ll be listing all my favorite ships, describing why I love them, and basically just wasting the time of anyone who reads this. This first post is on ships I like a lot but don’t frequently think of. The second will focus on some of the ships I think of more often, and the final post will focus on my absolute favorites. Anyways, I don’t know why you’d read this, but if you do, I hope you enjoy. Also, almost none of these are straight, so be aware of that.

Pikari x Teko: What makes this ship so strong is how it allows Teko to grow as a person. Before she met Pikari she was somewhat weak-willed and unable to move forward and had no self-confidence, but with Pikari’s help, she managed to find something she loved doing with a person she loved. At the same time, Pikari’s clearly hidden loneliness evaporated with Teko at her side, improving her life as well. They certainly have what may as well be a confession scene in the final episode, which is lovely. The OVA shows how important to each other, as Teko is seen as totally different by her old friends when they come to visit, to the point that one of them is jealous of Pikari.

Marika x Chiaki: Bodacious Space Pirates is a very gay show, and that comes through in our main relationship. Like many other couples on this list they’re not explicitly going out with one another, but the chemistry between them is great, so it’s easy to see them as more than friends. Marika’s naivety and carefree attitude contrasts well with Chiaki’s seriousness, especially since she opens up around Marika over time.

HM: Jenny x Lynn, Marika’s Harem: Jenny and Lynn are a canon couple and they’re incredibly cute. Their drive to be each other powered an entire arc, and it was great. On the other hand, half the girls in the school seem to have a crush on Marika, especially the princesses. It’s easy to imagine Marika as an older pirate with her own harem, though Chiaki would still certainly be the main draw.

Yukari x Miho: Yukari pretty explicitly has a crush on Miho, and the idea of their relationship works quite well. Yukari is a tank-otaku, so it makes sense for her to fawn over Miho, one of the best tank commanders we see in the show. Miho herself is incredibly kind and cares about all of her crew, and it’s easy to see how she would go from caring about Miho as a comrade to caring about her as a romantic interest.

HM: Anchovy x Pepperoni, many others: This series is all-girls, so obviously it has a lot of ships. Anchovy x Pepperoni is cute since Anchovy is so short and somewhat incompetent in spite of how much she tries. Other great ships include Nonna x Katyusha, Darjeeling x Orange Pekoe, Maho x Erika, and many more.

Anna x Shuu: There’s almost no fan material of this but they’re so good. Anna has some issues across the series with not actually understanding why Shuu wears girls’ clothes, but their ultimate conclusion is incredibly important. When Shuu finally comes out to Anna as a trans girl she’s quick to accept it and kiss her in return. This is so validating and I honestly can’t describe everything I love about it. They’re already pretty cute in the series and I can only imagine that’ll grow as their relationship continues.

Yui x Azusa: God, they’re so cute. Yui and Azusa are already my favorite characters in the series, and they’re only better together. Throughout the series, it’s pretty clear that Azusa is closer to Yui than any of the other upperclassmen, and Yui is closer to Azusa than she is to anyone else other than Ui. Yui is constantly fawning over Azusa, and even though Azusa is tsundere about it, she clearly enjoys it. Their partnership in the local festival episode was great, and I can easily imagine them going out once Azusa enters college.

HM: Mio x Ritsu: This one doesn’t need much explanation. They’re incredibly close already, and they would only be better as a couple.

Ginko x Tanyuu: This is just cute. Ginko doesn’t have a ton of people he talks to frequently, so it’s really cool that he’s actually close to Tanyuu. Even cooler is the fact that Tanyuu’s strongest desire is to eventually be able to freely travel with Ginko. I really want Ginko to have a partner to travel with him, and Tanyuu is a perfect fit for that.

Shinji x Kaworu: Now I’m not going to lie, this relationship is pretty problematic. The fact that Kaworu is an angel gives it a massive power imbalance, only amplified by the fact that he started talking to Shinji when he was in a pretty vulnerable position. But they’re incredibly cute so I can overlook that. And while it is problematic, it’s hardly as bad as any of the other viable ships for Shinji.

Akira x Yukari: These two are so perfect. Before the show, there were signs they’d be pushed, but I didn’t expect it to go this far. At this point, we’ve got everything short of a kiss, which is amazing given that this is a show for kids. They’re a fairly traditional butch/femme couple but it works really well. Akira lacks the coldness common to characters of her archetype, and Yukari’s smugness hiding her vulnerable shell is great. It’s also great that Yukari is clearly the tachi in this relationship in spite of being the more femme person.

HM: Tsubomi x Erika, Yuri x Momoka: Both these ships are really good in Heartcatch, even if there isn’t that much evidence. Tsubomi is still attracted to Itsuki even after learning she’s a girl though, so I can definitely see this happening.

Haruka x Michiru: These two are so hot. I swear, every time they’re on-screen I’m in awe. I’m not alone in that, since all the other characters clearly have a crush on at least Haruka, if not Michiru as well. They’re the models for Akira and Yukari so they’re similar in a lot of ways, but they have a different air to them. Despite being in high school they actually feel like adults, perhaps because they tell sexual innuendo to each other. They’re both just incredibly beautiful, and they only look better together. It’s amazing they existed in the 90s.

HM: Chibiusa x Hotaru, Minako x Rei, Ami x Makoto: These are all cute. I also tend to think Usagi would be better off with someone who isn’t Mamoru, but I don’t really have anyone to ship her with so she’s not on here. None of the girls in Sailor Moon come across as particularly straight even if they mostly like boys to some extent, so it’s easy to ship them with each other.

Aer x Neviril: These two are the driving force of Simoun, so it’s only natural that I like them as a couple. Aer really helps Neviril to grow and move past her mourning for Amuria, and together they eventually go beyond their dimension or something. The real key point here is that their love allowed them to escape into another dimension, and that’s really cool. The two of them loved one another so much that they didn’t need to make a stupid binary choice between male and female, which is just really cool.

Willem x Chtholly: These two are the sole reason I like this show. I know some people wanted the other volumes to be adapted but I’m happy with what they did because all I really ever wanted was to see their story. It’s a bit problematic given the age and power imbalance, but they’re honestly just really cute. Willem manages to really come out of his shell with Chtholly’s help, while she manages to grow into a person who truly values her own life. It should be clear that it takes a lot for a straight ship to be a favorite of mine, and they made it because their story is just so nice. 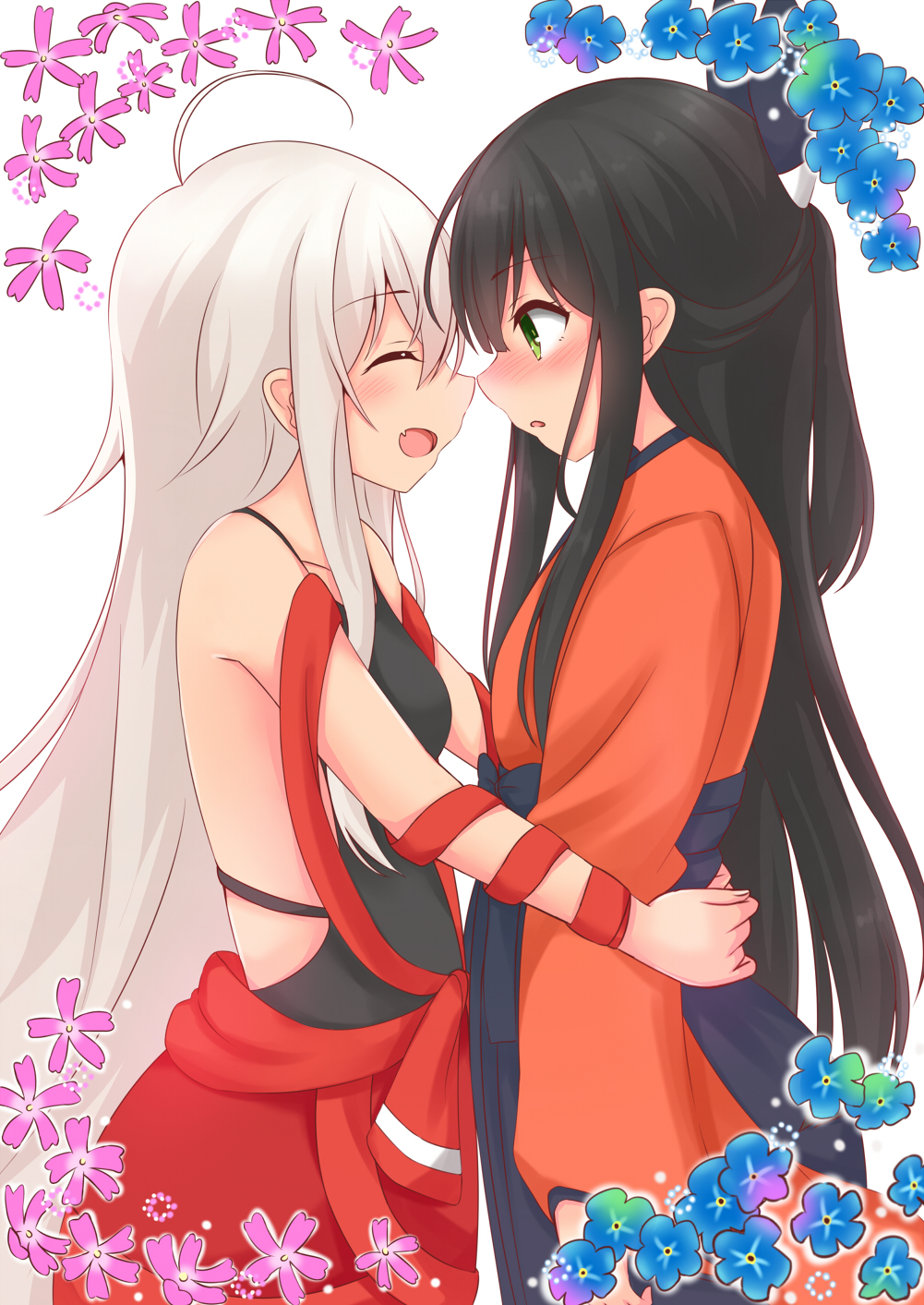 Chiya x Kon: Alright, these two are basically canon. They’re from a Kirara manga so obviously, there’s going to be some subtext, but it goes beyond that with these two. The four main girls are all pretty close to one another, but Chiya and Kon get the most mutual development with one another, so they have the closest bond. At the very least Kon has a crush on Chiya, but there’s a lot to imply that the feeling is mutual. Like most Kirara characters they’re both very cute, and only more so when they’re together.

HM: Nina x Saku: This one is actual, outright canon. Saku is in love with Nina who clearly reciprocates. They basically raised Nono as mother and father. They’re still in that vague, ambiguous state where they might not be in a relationship, but they definitely love each other which certainly makes me fond of shipping them.

5 thoughts on “My Favorite Ships Part 1: Ships I Really Like”