This was an oddly happy week of anime, and I have no problem with that. I am worried though, since such happiness with a few weeks to go can be a worrying sign. One show finished this week, and more will be ending shortly, so hopefully I’ll be able to watch the show’s I never picked up this season once most of my currently watching shows are done. If everything goes according to plan, I’ll be watching a few less shows next season, though we’ll see as the month goes on. As always, we’ll start with Rakugo, which remains the season’s premiere show.

This was another excellent episode, and perhaps my favorite in the whole show. The incredibly somber tone of the previous episode was used excellently, by making an episode which is so thoroughly happy and uplifting that you can’t help but go along with it. After multiple episodes of dread we got an episode that was as happy as this season’s earlier entries.

The thing that truly made this episode the best was Konatsu. Her sheer happiness was absolutely infectious. From happily learning that she’s pregnant with Yota’s child to reconciling with Kiku, everything goes well for her this episode. Despite the burning of the theater, her life is absolutely on an upward slope. We learn that not only is all this going for her, but she has a real chance of becoming a performer herself, ushering women into rakugo. Yota is looking for scripts for her to perform, something he’s wanted her to do since the very beginning, and Kiku accepts her as his disciple, though his possible death may make that hard.

The burning of the theater seems like a good thing at this point. It’s totally severed the ties to the past in rakugo, and it seems as if the art will truly be able to modernize. Kiku is soon to pass on, taking the last of the traditional style with him, and in doing so Yota and Konatsu will usher in a new era, with new stories and increased freedom within the art. Kiku seems ready to peacefully accept his death and with it the changing of his arc, and I’m ready for it too. 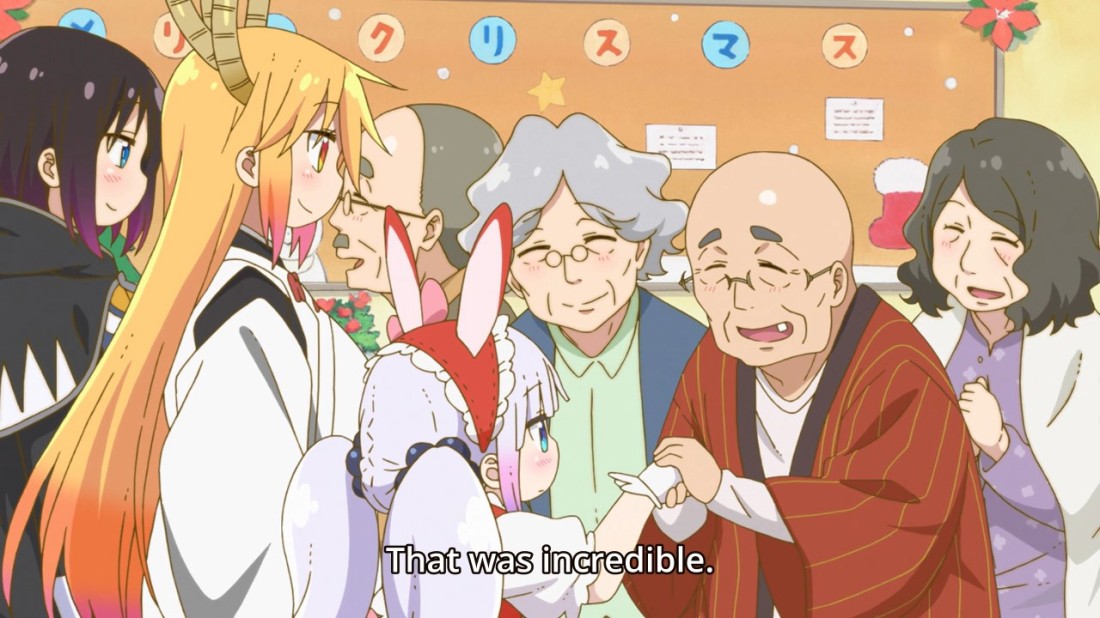 This episode confirmed to me that this show is as good as it is because KyoAni is making it. A lot of content in this show has been anime original so far, but this episode was totally original, and it was great. It’s just as good as there previous episodes, and it manages to do everything it needs to. The play was hilarious, and I find the jokes surrounding Saikawa to be generally fine. Lucoa was still a bit overplayed and annoying, but overall there was no substantial difference in tone from an ordinary episode. KyoAni knows exactly how to take the manga’s emotional core and general style of humor, and transfer it into the anime, change it a great deal while keeping the same principles. I’m happy they’re the ones adapting this, and I’m happy to see anime original content instead of the content they could have gone with from the manga(it’s worse).

This was a really great and happy episode, but I don’t have a ton to say on it. The sense of care for Shimada was great, and the return of the Kawamoto family was just as good. I’m happy Rei is returning to them, and I want to see more of them. That said, I’m worried that this episode should have been the finale. I can’t imagine that the next two chapters of the manga are a suitable stopping point, or at least a better point to stop than here. I really like this show and I’d like it to end well, so I’m gonna hope that Shaft can pull it off, but we’ll see.

Another excellent episode. This one managed to use both character interactions and our lack of knowledge about the world to craft a decent mystery, while maintaining the show’s charm. I love how many ideas this show can succesfully play with. Most shows would fall apart trying to do as many things as this show, but here it all works. I loved all the lore stuff that happened this episode, especially the stuff surrounding Mirai and the previous(?) Serval. Unfortunately there’s only two episodes remaining, but I don’t foresee dissapointment with this show at this point.

This show really nailed its themes and the sense of progression for the characters and the plot, but I don’t really think I can talk about that. They were almost, if not just as well executed last week, and while they play a major role in the show they didn’t vary much here. What does need to be commented on is the fact that this show had a fucking cliffhanger. At this point, the Kirara show I would most closely associate Urara with would be Gakkou Gurashi, because it’s going so hard with its plot. It’s still a CGDCT show, but the intrigue and plot are so prominent here, I love it. CGDCT get boring when they do the same things(Kiniro Mosaic, Anne Happy), so one that really does something different is always interesting in my book.

I can’t say I was fond of this episode. The entire fountain scene was fantastic, really getting down to some of this show’s core themes, but the rest of the episode turned me off in various ways. I can’t say I’m fond of the Andrew/Akko ship, but it seems things are going that way and I can tolerate it, even if I don’t particularly like it. However, the whole love bee thing was awful. Love potion episodes are always creepy, especially when they make the recipients act pushy and awful like they did in this episode. The jokes weren’t as funny this time and the animation was worse as well, leading to an episode which was noticably worse than the last few.

I’m happy with this finale. In fact, I think it’s far better than last season’s finale, which was a bit of a let down. I can’t say I loved this season, as it made me remember that the show has a number of issues I forgot about after the first season ended. Despite that, it’s still usually a funny show, with occasional animation highlights to go along with it. That was true in this episode as well, particularly in the “Aqua Punch” scene, which went off-model in a different way than normal, but looked great doing so. I love the Axis Cult members, and if LN readers are telling the truth when they say that from here on there’s more focus on visiting other towns, I’m excited to eventually see this series continue(but what I really want is the Megumin spinoff).

I enjoyed this one a lot. The show’s really been leaning into the premise these last few episodes, and that’s helped the show recover from the mid-section, where it was falling into repetitive jokes far too often. I love the idea that Hell is basically just Earth while Heaven is Earth 100 years ago, since it makes since that Angels, desperate to avoid sin, would live incredibly boring lives. That said only so much can come from this, so I’m expecting to get a ton out of Satania’s shenanigans in the next episode. 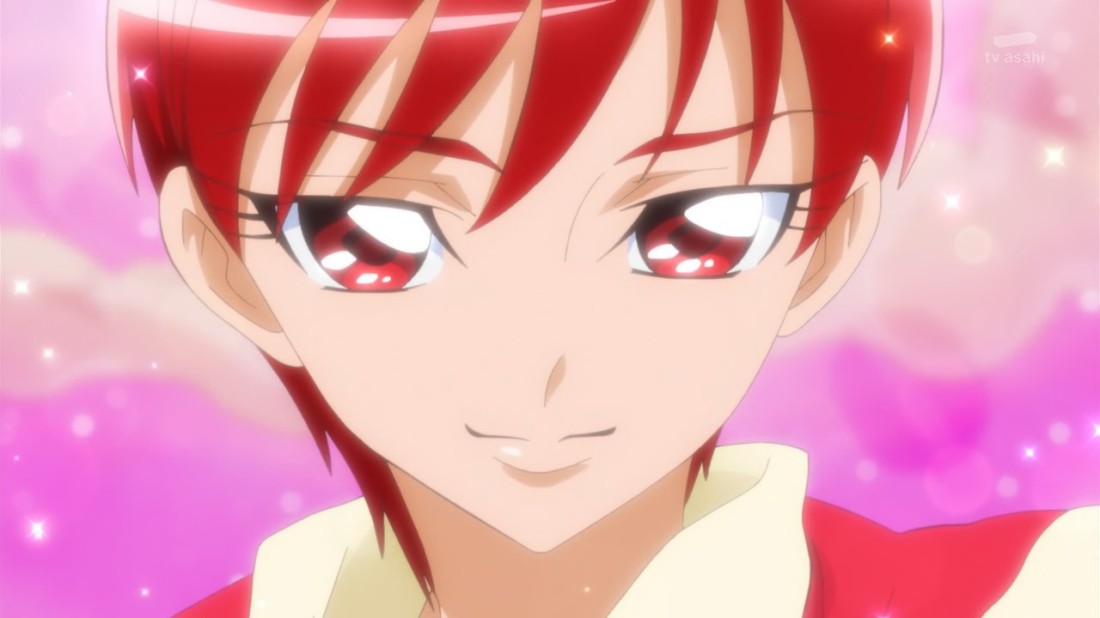 Akira is so great. I’m so happy we have these fantastic gay high schoolers in this show. The mini-arc with Ichika thinking Akira was a guy is a little too similar to Tsubomi and Itsuki in Heartcatch, but the fact that Akira actually comes across as gay unlike Itsuki definitely helps things out. Her transformation sequence was great(this series is really good at those in general) and her fight scene was good too. Now that the whole team’s assembled I’m curious to see which direction the show will go with its monsters-of-the week.

Cool episode. The Atra and Kudelia stuff was cool, especially because you don’t see actual polyamory in anime all that often, despite the numerous harems. Tekkadan is so screwed though. The true final battle looks like it’s about to begin, and there’s no real path for Tekkadan to actually win. They can survive, but they can’t actually thrive anymore. We’ll see what happens.