My birthday was yesterday, and it was pretty damn good. That’s not super important though. This was another good week of anime, and a pretty good week of writing as well. My next Why I Love It is totally done and ready to be published on Saturday. I really like this one and I hope others enjoy it as well. I’ve also got more Aria posts coming out on the same schedule, and I plan to get started on a number of new essay ideas, including a Nier: Automata essay. Look out for all that and more in the future, but for now enjoy my thoughts on this week. 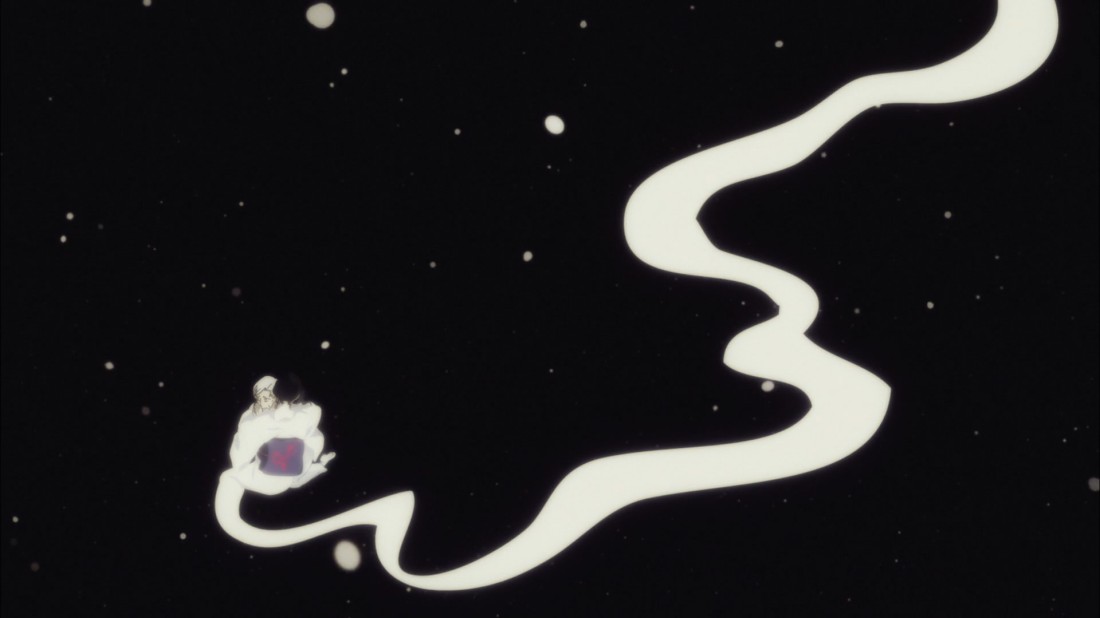 This episode was truly fantastic. The slow build-up and foreshadowing towards Kiku’s encounter with the shinigami was perfect, and his decision in the end made everything all the more tragic. Kiku is afraid of death, both his own and that of rakugo, but at the same time he can’t go on living without rakugo while being haunted by his past. He’s stuck in a terribly tragic place with no good escape route. I have to add that the direction this episode was great as well. The performance in the prison really seemed to reflect that even with his skill, he just couldn’t perform as well as he used to, while the part with Miyokichi used visuals to portray what was going on in expert fashion. On the other hand, his Shinigami performance was fantastic, truly showing how powerful of a performer he is, while also emphasizing how tiring it was. I adore this season, and if it ends right it could end up as a real favorite. 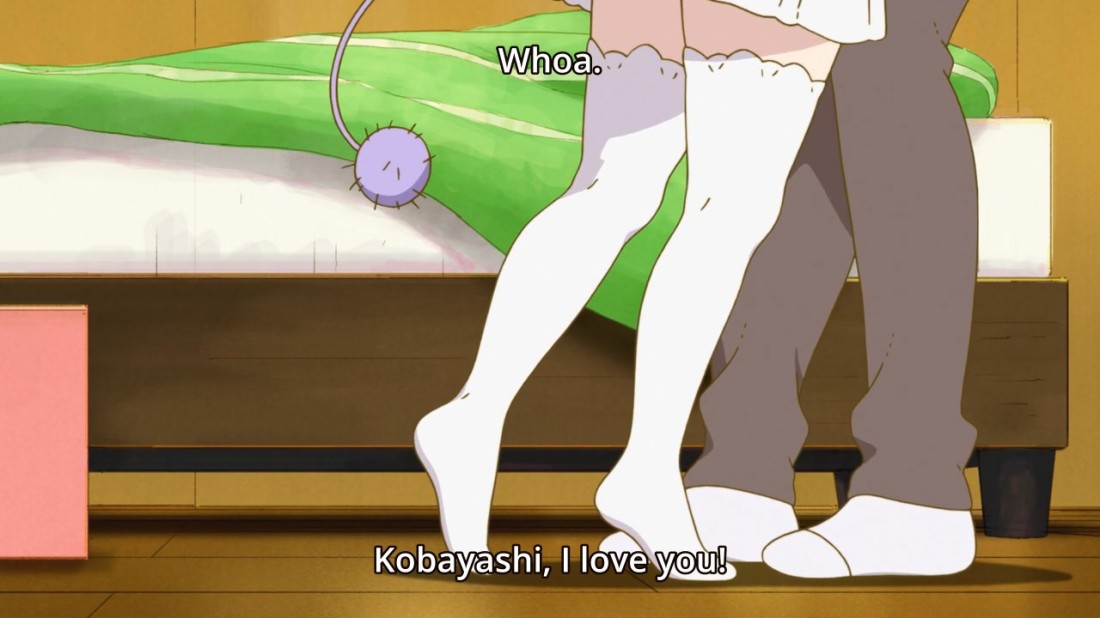 This show is so incredibly close to being my favorite of the season, and my second favorite of KyoAni. This episode was close to perfect from start to finish, and it really exemplified what makes this series more wonderful. The focus on family bonds, this time between Kanna and Kobayashi were handled with excellence. Kanna’s overwhelming desire to see Kobayashi come to her sports festival was adorable, and it was great to see Kobayashi realize she wanted to go in order to make Kanna happy. This family sure is great. The rest was great too. Saikawa’s love of Kanna was as cute as always, and the other characters were cool too. The jokes with Lucoa are still a bit uncomfortable, but they were far less so this time. We’re really lucky that there’s four more episodes and an OVA.

This was another good episode, and it served as a fitting conclusion to this arc. The early focus on what Shimada’s life could have been if he had given up shogi was sad, drilling in the idea that he was unnecessarily focused on one thing, blind to all else. This idea is followed through at the episode’s end, with Shimada totally missing his chance to turn the episode around. The tunnel vision caused by Souya’s reputation alongside his sickness and fatigue caused him to totally miss his chance at victory. However this inspired Rei, making it clear to him that Souya is beatable. When you combine this with his ability to stand up for himself and Shimada in this episode, Rei really showed off his progress, and though we won’t likely be getting it this season, I’m eager to see how it pays off for him in his future matches.

Yeah, it’s still good. The weaving in of plot and worldbuilding was particularly good this episode, and at times it was used in really funny ways. This is most clear in the fact that Friends literally did not know they could take off their clothes until Bag-chan told them that, which I find absolutely hilarious. The intrigue is getting more intense as the show goes on, but the slice-of-life style episodes are just as fun each week. Episode after episode Kemono Friends manages to defy the expected, so even if it isn’t my favorite anime of the season, it deserves a lot of props.

This episode continued this show’s trend of focusing on the story, but it did so to an even greater degree than usual. This episode imbued the show with a meaningful sense of progression, something you’ll rarely find in most CGDCT shows until the series is almost over. It’s a very slow progression, and one which clearly will never be adapted to completion, but it adds a lot to the show. The focus on becoming better as urara doesn’t feel is validated by episodes like this which show their actual progression. The show remains cute and fun, but it stands out mostly due to a sense of intrigue and narrative expedience that you just don’t find in these kinds of shows.

This show keeps slipping down my seasonal rankings, though it’s mostly through no fault of its own. If only there weren’t a fair number of great shows this season. Anyways, after the absolutely excellent last episode this one was a major step down, but it was still very enjoyable. The actual story beats were somewhat predictable and weren’t done particularly well, but I found most of the jokes funny and I enjoyed the slight fleshing out of the Headmaster and the world. I really enjoy the way this show weaves light progression into episodes that are otherwise totally irrelevant. Like I said, this episode is a step down from the previous one in literally every way, but I’m still quite happy that this show is airing.

I absolutely love the fact that Aqua’s followers are even dumber than she is. It wouldn’t feel right if they were somehow intelligent, so the way they’ve been executed is great. I do feel bad at this point that only Kazuma believes Aqua’s really a goddess, but what are you going to do. This joke wasn’t perfect, mostly because it had a “Kazuma is a perv” joke, but that joke was decent as they go, and the rest of the episode was pretty damn good. Hopefully the season ends on a high note next week. 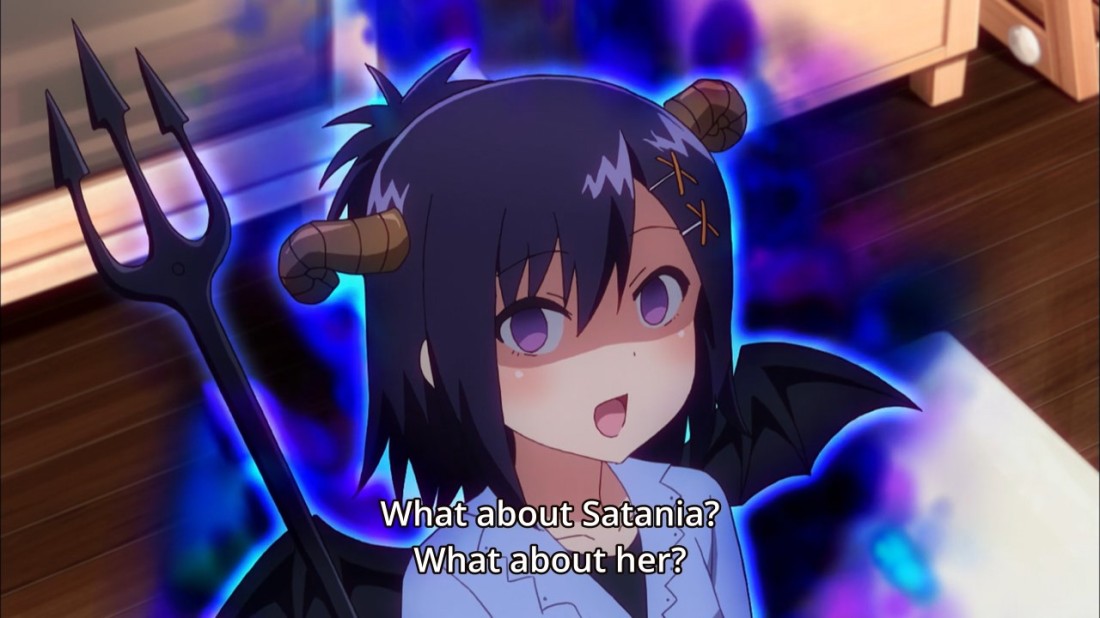 Yeah, this was a good episode of the show. It managed to lean into the premise heavily without seeming like the jokes were all repeats, and without focusing too much on any one character’s quirks. The skit at the end with Gab was one of her funniest in a while, and the idea of actually getting a glimpse at Heaven and Hell is an exciting one. I see no reason not to look forward to the coming episodes, and while this show isn’t a masterpiece, it’ll end well if it keeps up this level of quality.

As expected, the high schoolers are great, or at least Yukari is. I knew from the beginning that Yukari and Akira were going to be the best in this show, and this episode proved me right. Yukari is haughty in a hot way and also looks really good and I basically just like her a lot. This episode mostly focused on her, and because of that it was a fantastic episode. I’m just as excited to see fantastic tomboy Akira and then to see them be gay together, but I can wait. Last episode wasn’t perfect, but this one really managed to keep me invested. Magical girls are good, actually.

This episode wasn’t great, though I’m not surprised at that. This battle is long and drawn out, so it was to be expected that the arc would be as well, but that doesn’t make it any less interesting. Deaths that should have happened(Julieta) didn’t happen, and not much progress was made in general. The scenes with Yamagi were good, but this felt like a repeat of the last two episodes in a bad way. Hopefully this is just a filler-ish one and the final four are competent.