Finally, I’m on track for once. I’ve got a post waiting for its final revision, hopefully going up this weekend, and a plan for more essays on the way. My anime watching speed is picking up for real this time, and my “Why I Love It” project is well underway, alongside the shows I watch for fun. Basically, this week was great for me, and hopefully I can keep saying that from here on out. This week was pretty great episode-wise too, so enjoy my thoughts. 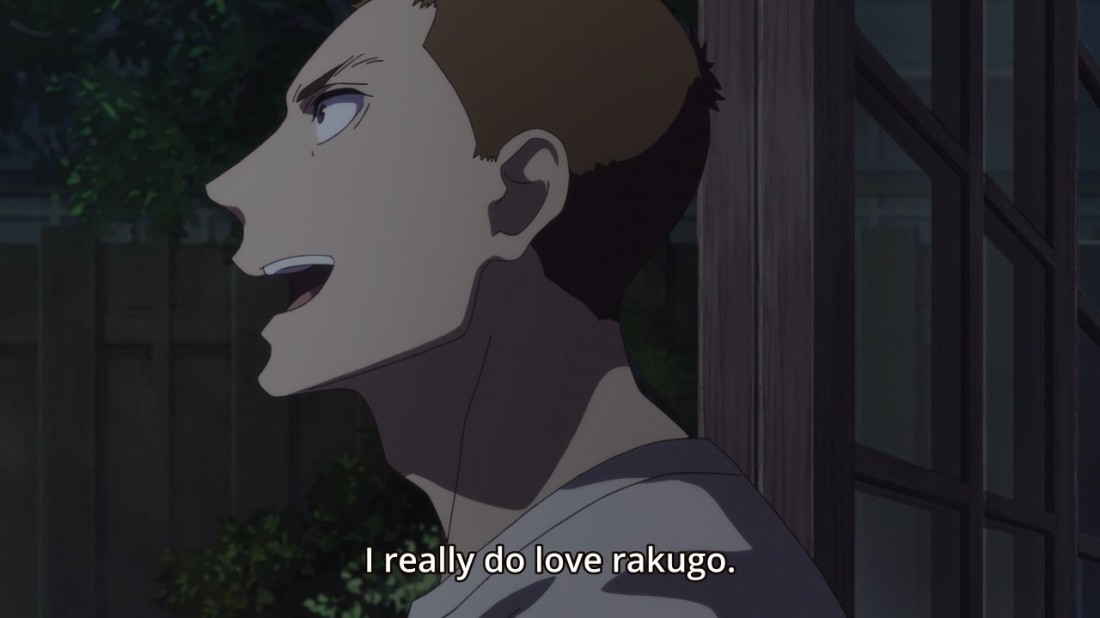 Last episode’s happy family times couldn’t last. As soon as the OP showed Sukeroku’s eyes in red, I knew this wouldn’t be a happy one, and I was right. Yota continued his search for his own rakugo in the first half, but the second half is really what’s worth paying attention to this episode. Kiku’s performance was haunting from the start, but once the incense starts getting to him he really takes a drop. His health has been poor all season, but at this point he seems to become ill to the point of near death, seeing both Sukeroku and Miyokichi. It seems to me that his vision of Sukeroku with the candles is not Sukeroku killing him, but Sukeroku denying him death. At this point Kiku just wants to die and have rakugo die with him, and Sukeroku apologizes for denying him that mercy. This episode was great overall, but the last third was absolutely excellent, and I can’t wait to see the followup.

It’s hard to over-exaggerate how much I love this show. Week after week it seems to improve, and it’s gone far beyond where I expected it to when I first saw that KyoAni was doing it. I really see this show as more of a romcom than a regular comedy, and one that can do sentimental moments incredibly well, and this episode backed that idea up. Kobayashi’s feelings towards Tooru are still quite vague, but it’s clear enough how much she values Tooru just based on how much happier she’s become. Tooru on the other hand has changed as well, seeing as she now recognizes humans as a whole as having value, if only because Kobayashi is one herself. This show manages to blend its comedy and its emotional moments quite well, leading to what I would honestly call one of the best yuri manga, and one of KyoAni’s better shows.

This episode wasn’t quite as good as the last two, but it was still great. I know I say this every episode, but Akko remained one of the most charming protagonists in anime. Her optimism in spite of her poor skill and sometimes bad attitude is really contagious, and makes me strive to be more optimistic as well. Diana really stole the show here, easily showing off why she really does deserve to be as haughty as she is, while adding to one of the show’s funniest jokes so far — that of a greedy old Stooge of a dragon. Production stayed high quality as well, maintaining all of the show’s visual splendor which adds so much. 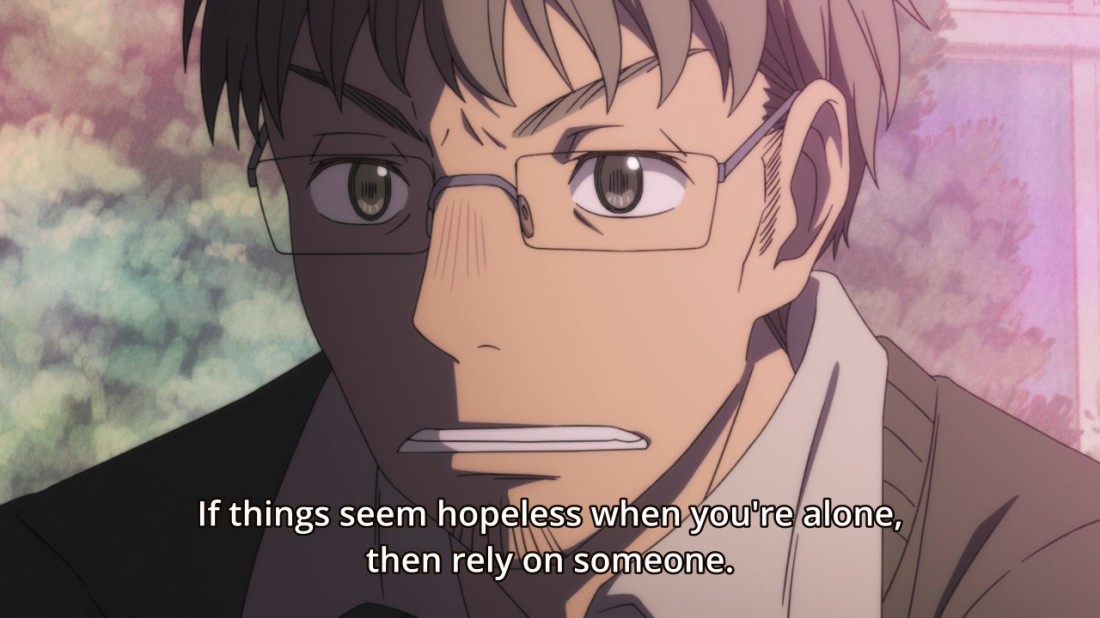 Rei is really branching out and becoming social with more people, and it’s clear how much good it’s doing him. I’d still like to see him spending more time with the Kawamoto family, but with the end of this tournament arc I assume he will soon. This show is at its best when Rei comes out of his shell and gains something because of it, and this episode managed to focus on him more than the shogi, something the previous episode really failed at. Rei is really willing to rely on others now, and as his teacher said, that will allow others to rely on him, strengthening his relationships and really allowing him to become a much more fulfilled person.

Last episode was inconsistently funny and just seemed a little too formulaic, something which can really hurt a comedy. This episode managed to totally turn that around, remaining funny from beginning to end while introducing a great new character. Tapris is a fantastic addition, adding a whole new dynamic to every other character. Vigne gets to be respected for all her kindness while Satania is given a chance to actually act like a demon. Her relationship with Gab is good too, since the mix of disillusionment and her obvious crush make her both pitiable and funny. I hope this episode is a sign of things to come, because it certainly managed to make me excited for more again. 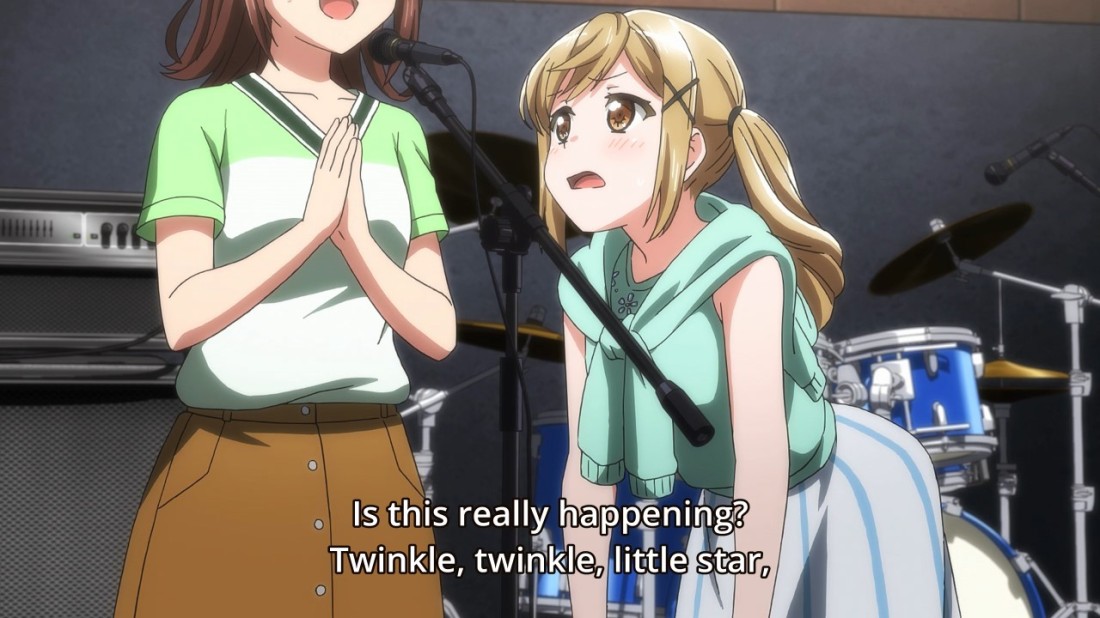 I decided to pick this show up on a whim. I enjoy it because of how authentically genki Kasumi is, and this episode really showed that off. Her singing of Twinkle Twinkle Little Star was the very definition of cringe, but it really showed of what makes her interesting as a protagonist. She’s a lot like Honoka or Chika in that she’s willing to jump in headfirst in helping others and getting people into her group, but unlike those two she’s a lot more willing to back off when she’s getting the sign she should. The show’s solid but right now Kasumi’s really carrying it, but seeing as she’s the protagonist that’s fine.

I really liked the elaboration on Kon’s personality here. Her desire to be the best while still wanting to have fun and support her friends has some actual weight to it, and it’s something I can relate to on some level. This show manages to pack a lot of pathos into its episodes, something I’m very thankful for. I also like how Kyousougiga this episode seemed. The rabbit-fox god seemed straight out of that show, and the town itself already seemed like Kyousougiga’s Kyoto. Kyousougiga has one of my favorite aesthetics in anime, so the similarities here really add to the show for me. 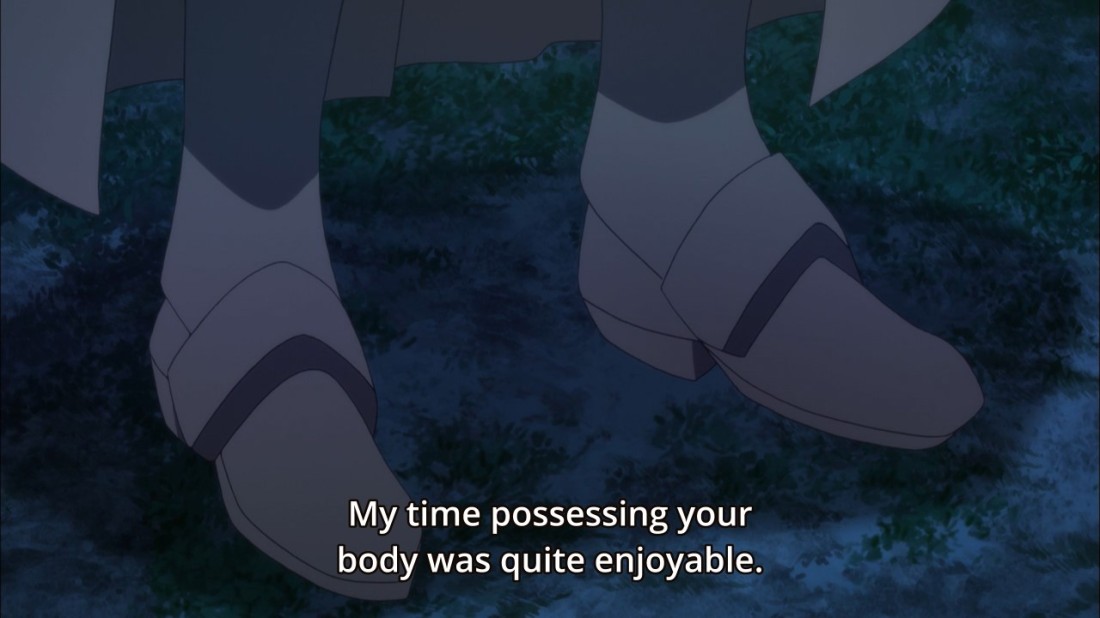 Not super pleased with how Season 2 is going now. This episode was much better than the previous one, but that was tied for worst in the series, so that isn’t much of a high bar. The jokes around Darkness here weren’t unfunny like in the last episode, but just not very appealing. Basically, Darkness is boring at best and awful at worst, and I want her to go away. Season 2 was great when she did go away, it’s a real shame she had to return. Hopefully we’ll get some more Megumin and Aqua focused episodes to fix everything.

This was mostly just a fight episode, and the fights were cool. More interesting is that McGillis’s plan is finally in motion after 40 episodes. He’s spent a long time building up to this revolution within Gjallarhorn, and it better be worth it. Orga is getting even more brutal and unhinged as time goes on, with his motives this episode being purely revenge-based, giving no mercy to those he fought. I don’t see the future turning out well, but watching people ruin themselves like this can be fun, so I’m enjoying it.

This is just here at the bottom for no real reason, it’s not ranked.

Fun, fun, fun. This was a very fun episode of anime. Precure, like most magical girl shows that don’t crib Madoka, is just viscerally enjoyable, capturing the same child-like wonder and enjoyment that something like LWA specializes in. It’s a bit dissapointing that there doesn’t appear to be any real fist fighting this time around, but it’s fun in spite of that. I’ll probably have more to say once the other Cures show up, but Ichika is a fun protagonist, and we already got some decent emotions from her. I’m excited for the rest.