Re:Zero is a show that perfectly encapsulates how frustration towards certain overplayed tropes and cliches can affect my enjoyment of a show. Re:Zero is a show with a lot of very interesting themes and ideas, from its challenging of the general tropes of isekai and sekaikei shows to its shitting on Subaru for being an entitled “Nice Guy” who expects love and adoration from the girl he’s obsessed with just for being nice. But in order to address these things, Re:Zero had to partake in the tropes it criticized, which unfortunately dragged down my experience of the show.

This is an interesting conundrum, as without engaging in these tropes — being trapped in another world, treating the world as if it were a game, an otaku protagonist, a harem aesthetic, a near-perfect waifu(Rem), etc. — it wouldn’t actually be capable of commenting on the tropes. They have to be there for the show’s central draw to work, but them being there still brings down the show, because it’s so overdone that even criticism of it feels wrong unless it’s total, and Re:Zero is not total in its criticism. 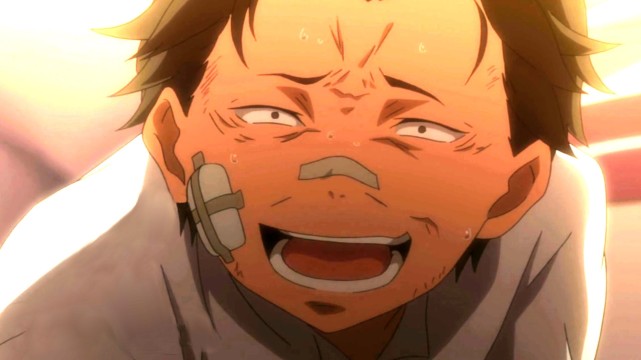 Now as I said, the show’s commentary is often interesting. Most like episode 15 the most, but I am a fan of 13, which tears down the repulsive protagonist often presented in isekai, and other extreme otaku-bait shows, in which the protagonist is given everything — every girl’s love, extreme power, a large roster of enemies for him to easily topple, etc. — merely for being in the right place in the right time. Subaru is shown to be a terrible person, one who has few if any positive aspects to him at this point in time. But the fact is that this occurs after Subaru seemingly got what he wanted by luck. It was necessary to build up to this moment, but that does nothing to make the past during which I was annoyed by the show’s seeming willingness to go down the expected, and terrible, path.

Re:Zero uses the tropes it has well — well enough for me to say that I think the show is good. But Subaru’s personality and presentation prior to Episode 13 is appalling, and this prevents me from loving it. It’s important, but relevance does little to erase my feelings during the first half of the show. If the show somehow could function as the second half alone I could perhaps call it a great show, but the first half prevents that from doing so. On a rewatch perhaps I would be better at recognizing how the show built up to the pivotal moment in Episode 13 and come to enjoy the show more, but for now it stands as a show which I like and will watch more of, but not as a show which I will remember for much other than its popularity and a few interesting ideas.